A short distance past this house TURN RIGHT down a field and boreen onto the main road where you TURN LEFT and take your first RIGHT at the next cross and down to the pier at Tra Ruiam (“the strand of the barking”). Fishermen used to boil their nets and rope here mixed with the bark of the alder. This rocess, known as “barking”, would act as a reservative on their … END_OF_DOCUMENT_TOKEN_TO_BE_REPLACED

By Jerry Jack Owen Daly, Local Historian and Storyteller, left the Crimea 1938, aged 17 “The Boer War was finishing at the same time, and there was six or seven tenants here. And Tom Ned over in Gortavallig (he was the sublandlord of this area at the time), this was all called Gortavallig then. And they used to go south (for Tom Ned), one of them would go south when … END_OF_DOCUMENT_TOKEN_TO_BE_REPLACED 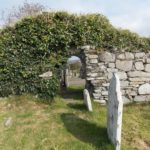 Try the Coomkeen Loop near Durrus Village or the Funeral Path in Kilcrohane which is only just over 6km or take the ferry from Bantry to Whiddy Island. (Be aware that the ground can be wet and slippery in places even on a dry day so good walking footwear is a must.) … END_OF_DOCUMENT_TOKEN_TO_BE_REPLACED

Plants of wet boggy ground The bogs of the Sheep’s Head Peninsula are classified as blanket bogs. The bogs occur in Ireland along with the Western Sea board, where rain falls on the more than 250 days per year and the total rainfall is greater than 1250 mm (50 inches) per year. Blanket bogs feature acid, poorly drained soils and many are now being turned over to forestry … END_OF_DOCUMENT_TOKEN_TO_BE_REPLACED

Muintir Bháire is the ancient name for the Sheep’s Head peninsula. Bháire was a descendant of Fodhradh Canaan of the Corca Luighe or the race of the Lughaidh, who settled in this country in the pre-Christian era. Muintir Bháire are “the people of Bháire”. The land holds many reminders of the early inhabitants – lioses or dúns, promontory forts, earthen caishils and … END_OF_DOCUMENT_TOKEN_TO_BE_REPLACED

As usual each year, the Sheep’s Head Way is closed on 31 January, unless the expressed wishes of the Landowner states otherwise. This has become a customary practice which enables the landowner to grant permission for the public to access their land throughout the remaining year without risk of any public right of way being established. We hope you will respect this necessary inconvenience.

Due to storm damage, the forestry section of the Mount Corrin loop walk will remain closed until further notice.

In Case of Emergency